I would never have come across this hidden gem if it wasn’t for JT! The plan that Sunday was actually brunch at the Twisted Fork, however we were told that we wouldn’t be able to get a table that day, so feeling dejected, we had to find another place to eat. Thankfully JT lives in downtown Vancouver, so when we came across Loose Moose, she told us that there were always long lineups at night because everything in the restaurant was $6. You can’t really find anywhere cheaper than that in downtown Vancouver (although there is The Famous Warehouse located right around the corner where everything on the menu is only $5).

I ordered their Moose burger. It came with a side of fries as well. The portion size was on the smaller side, but it was perfect for me as I was able to finish everything without feeling too stuffed. As for the taste, there was nothing fancy about it; tastes like your average burger off the grill. I can see why it can get very busy at night though. It seems like a good place for people to watch a game together over a couple of beers and cheap food.

The Good
– Cheap eats (everything for $6)

The Bad
– Average tasting food
– Small portions (for those who are looking to get full, one order won’t be enough)

There aren’t that many places that offer fondue here in Vancouver. The first fondue place that I have ever tried was Capstone Fondue on Robson Street. I had their cheese fondue and overall, my experience was just average. Nothing special, and too expensive for what you get. This was a couple of years back, and a while ago I noticed that there was a Groupon for 50% off of fondue at Capstone, so I decided to give them another try.

I really like how they have an online reservation system on their website, especially because they don’t pick up phone calls so there would be no way to reserve by phone anyway. 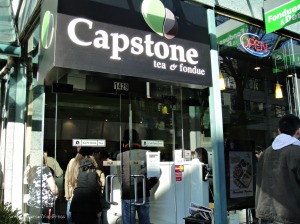 MilkTea, Mochi, JL, and I arrived at around 4pm, and it was already quite busy inside. The colour scheme inside was white and green. It was well-lit and it looked very pretty. They used to have bubble tea, but now they offer teas such as herbal teas and tea lattes (probably trying to change their image from a bubble tea place to a classy tea place).

We were promptly seated but we had trouble flagging down someone who could take our orders for us. After finally making our orders, we waited for quite some time before our orders came. We ordered a decadent cheesecake fondue for two and an ice-cream truffle fondue for two.

Individual pots of melted chocolate with a candle below

I liked these individual sized pots for the chocolate fondue. They didn’t have these the last time I was at Capstone.

This is the cheesecake fondue. It came with cheesecake cubes, ice-cream balls (green tea, mango, strawberry, cookies&cream), lemon cake, banana bread, green tea(?) shortbread, and 4 toppings. The server didn’t even ask us what toppings we would like to choose.

I thought that the ice-cream “truffle centres” were the best, but they had to be eaten quickly because the melted chocolate did not stick well to melting ice cream. My teeth hurt a bit when I bit into the ice cream truffle, but I soon got used to it and it was tasty nonetheless. :)

The cheesecake cubes tasted alright, but after being at room temperature for a while, it started to melt and would crumble when we tried to pierce them with the little fondue forks. The lemon cake was too dry, green tea shortbread was too hard to pierce with the forks so we had to use our hands, and the banana cake was probably the next best thing after the ice-cream balls.

Next up, the ice-cream truffle fondue for two: 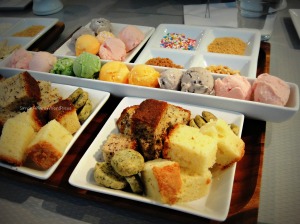 This one came with 16 ice-cream balls, shortbread, lemon cake, and banana cake. The only difference between this fondue set and the cheesecake one was that the cheesecake fondue set had cheesecake cubes and this one didn’t. Again, the server did not ask us what toppings we would like to have.

All in all, we were stuffed by the time we finished. The portions were good, and the individual pots were cute, but definitely not worth paying the original price for.

Japanese cuisine has always been one of my favourites. I have tried many Japanese restaurants and had sushi, sashimi, and tapa dishes. But I have never once tried pressed sushi. After hearing about Miku from MilkTea that they serve very good pressed sushi, I decided to pay Miku a visit.

Mochi and I went to Miku on a Wednesday night. I made reservations the night before for 7pm. When we arrived, the place was packed. The interior of the restaurant was very modern, and it was quite large inside. The lights gave everything a purple glow.

Even though we made reservations for 7pm, it didn’t look like we were going to be getting a table anytime soon. While we were waiting, the man at the bar asked us if we would like anything to drink, which we declined.

I enjoyed watching the servers make drinks at the bar though, and at one point while we were waiting, a beer bottle was accidentally tipped by the server before the cap was taken off, and it bubbled over. Since she couldn’t serve that bottle anymore (she had to open a new one), she gave that beer to us for free. :) I thought that was very nice of her, but I hope it wasn’t my staring that caused her to become nervous and tip it over in the first place.. ><

After waiting for over 30 minutes, we were finally seated at a table. The service was very good though, and they apologized many times for the long wait. Those who had no reservations were told that they would have to wait for two hours! At first I wasn’t going to make a reservation, since it was Wednesday night.. but I’m glad I did.

Mochi really liked to eat beef carpaccio, so we ordered their gyu tataki to start. Of course I also ordered the aburi salmon oshi sushi, their signature dish. We also ordered an una-kyu roll (eel roll).

The first dish that arrived was the gyu tataki:

The server introduced each dish upon presentation. This beef tataki is made from Alberta beef, drizzled with a sauce made from ponzu, yuzu kosho, grated daikon, and topped with green onion. Each piece of beef was fresh and chewy. The sauce drizzled over it was sour and balanced well with the beef. Delicious!

Next up was the aburi salmon oshi sushi:

Now I understand why everybody raves about Miku’s pressed sushi.. especially this dish. It was hands down one of the best sushi I have ever had! There were six pieces in an order. This sushi had a piece of salmon in between the rice, topped off with more salmon sashimi, drizzled with their very own Miku sauce, and topped with jalapeno. Unlike most Japanese restaurants, Miku’s sushi does not require soy sauce. It tastes fabulous just on its own. Even the rice was tasty; it was cooked and seasoned perfectly. The jalapeno was not too spicy, and the sushi itself tasted warm (being just seared) and melted in my mouth.

The last dish to arrive was the Una-kyu roll:

This roll wasn’t all that special, and after having the aburi salmon sushi, this roll was not too exciting in comparison. The sushi is made with barbequed fresh water eel tempura, cucumber, topped with seven spice salt, and flavoured with unagi sauce. The eel tasted a bit rubbery but everything was fresh, and again the sushi rice was excellent. However, for the same price as the previous dish, I wouldn’t mind getting another plate of the aburi salmon oshi sushi!

After dining here, I finally understood why we had to wait so long for a table. The food here was served one dish at a time, unlike most places which serve everything almost all at once. They also introduce the food, with a detailed description of everything.

– Long wait time
–  Pricey, but worth it

A few weeks ago I went back to W.E. Coffee for a second time to use up the coupons that I bought from Indulge Living. I went with A, M and J on a sunny afternoon to relax and eat some yummy food. We noticed some differences immediately upon arrival at the restaurant. Before, the server would lead us to a table and give us menus then take our orders. However, that has all changed. We must now go up by ourselves to the counter and give our orders and pay before we get our food. I don’t like this new change all that much.

I didn’t really have a proper lunch when I got there even though it was 2pm already. So first I ordered a panini to share with M. We got the smoked turkey panini. It came with smoked turkey breast, basil pesto, lettuce, tomatoes, avocado, provolone cheese and dijon mustard on ciabatta bread.

A close-up of the smoked turkey panini

This was my first time having a panini. It also came with a salad on the side. It was extremely delicious! The panini tasted very flavorful and the bread was nicely toasted and had a nice crunch to it. The ingredients were really fresh and worked together perfectly. I thought that the vinaigrette used in the salad was a bit too sour for my liking though but I still polished off the entire plate with M.

J and A both got the tuna salad and fresh vegetables waffle: 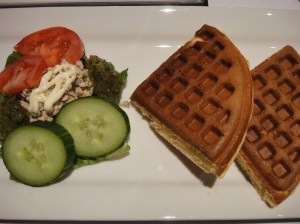 A wanted to get the red bean green tea waffle at first. The first time that we came, the waitress told us that there was a new waffle flavour that has not been added onto the menu yet: red bean green tea. However, I guess it was not too popular so they no longer serve it! That was too bad. I think red bean and green tea taste great together.. especially on a waffle.

After the panini, M and I got the Strawberries and Ice Cream waffle for dessert: 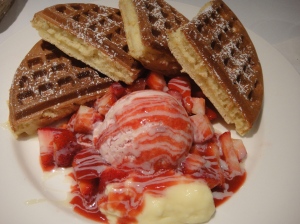 A close-up of the strawberries, ice-cream and custard.

This is my favourite waffle flavour. Not just at W.E. Coffee, but just in general. There is just something about strawberries and waffles that I really enjoy. I prefer sweet waffles over savory ones as well.

All in all I must say that it was a very enjoyable and tasty experience. However, I think that W.E. Coffee is a bit pricey. However, a once-in-awhile indulgence is always nice!