I’m not sure if you’ve seen it in the news, but Taiwan recently made headlines in international news for protests against a trade deal with China.

If you haven’t seen it, here’s a brief update:
– President Ma of Taiwan is planning to sign a trade alliance with China, which would open Taiwan to Chinese trades
– This signing was to be signed without first fully informing the people of Taiwan, which infuriated many people
– Last Tuesday, university students stormed the legislative building and took over so the signing couldn’t happen
– The argument was that Taiwanese people did not want Taiwan to be sold to China; they feel like this agreement will lead to more job competition.

I applaud the people of Taiwan for standing up for what they believe is right, and for doing all this in a non-violent way. I think it’s great that Taiwan has a voice, which is quite unlike China and North Korea. So although Taiwan is technically a part of China, Taiwan is a democracy.

After some discussion with others on this topic, I realized that people were worried about this agreement because it would mean more Chinese people coming into Taiwan, taking over more jobs, and Taiwan would eventually become ruled by Chinese. A lot of political talk. Also, Chinese students would actually get scholarships if they choose to study in Taiwan. And whose money is that? Of course the Taiwanese taxpayers! However, I also learned that banks want the agreement to be signed, because China would grant a large sum of money towards Taiwan banks for trading purposes, so Taiwan would not have to depend on Hong Kong for international trade.

Mic brought up some very good point though, that I’d like to express here:
He said there was a lot of political involvement, and it wasn’t so simple.
Also, Taiwanese should not feel like they’ve already lost even before the battle has even started. Who says that the Chinese will take over? It all depends on how the agreement is written. Take Singapore for example. It is extremely successful on the international platform, but they also open job openings to foreigners. However, there are strict and narrow laws governing these foreign workers. Taiwan has to make sure that this agreement benefits Taiwan, rather than tipping one-sided towards China!
Lastly, he said that instead of occupying the legislature, the students should hold their own meeting and write their own version of the trade agreement. Apparently the students did do that by hosting a meeting marking their 100th hour of protest, and had a debate for and against the trade agreement.

Let’s see how this unfolds now; the government cannot continue to stand by for much longer. Something’s gotta give.

We have a new member in our family! 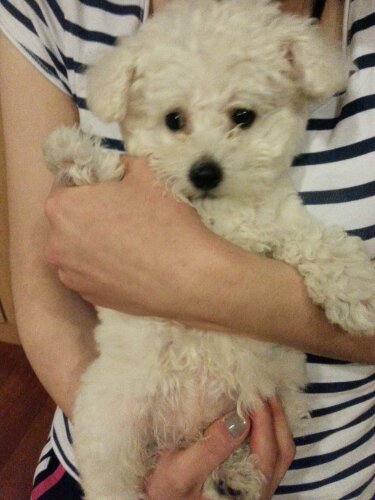 On Tuesday, mom and dad went out for a particularly long walk, and when they came back, mommy carried a little white fur ball into the bedroom. SURPRISE! His bright eyes and teddy bear look were irresistible! He immediately became everyone’s centre of attention. Poor Yoyo… We neglected him that night because we were too busy setting up QB’s cage and getting him acquainted to his new surrounding. QB is such a quiet pup. We have not heard him bark once. He whimpers if we leave him alone in his cage though, because he needs to be around people. I can’t wait to take him outside to meet other dogs, but right now, he needs to stay at home and wait until he has had all his puppy shots. There are so many things that we want to do with QB… Take him out for walks, go hiking, play fetch in the park. Poodles are the second-most intelligent dog out of all dog breeds, so the vet said to not feed him delicious-tasting human food. Otherwise he will become a very picky eater and that wouldn’t be good. But those puppy eyes… *_*

My mom and dad’s birthdays both land on March 10th. March 10th seems like a common birth date, because I know 2 other people with the same birthday! (My birthday is also a common date) This year is the first time in 10 years that I can actually spend this special day with my parents! MM and I surprised them with a chocolate cake this morning, and with a birthday card. Dad complained and said that he didn’t want a cake, but inside we knew that he was actually quite happy.

This year I finally started to understand the hard work that it takes to be a parent, from listening to my boss talk about his daughter, and coworkers talking about their kids, I really learned to appreciate what parents do for their children. I only hope that if and when I become a mom, I can be half the mom that my parents are!

Mom and dad, I know I’m often not at home because I’m always out and about, but I’ll try to spend more time with you guys! Thanks for everything that you’ve done for me, and for giving sis and me the opportunity to receive world-class education in Canada. Dad, it was really brave of you to take us there all by yourself, and mom, even though you couldn’t be there to watch us grow, we’re reunited now after so many years. We’ll do lots of fun things together now to make up for the lost time.

Happy birthday, mom and dad! :) Stay healthy. We love you.

Yoyo took a shower in MM’s palms this morning. We just let the water trickle from the faucet, and he had a jolly good time. 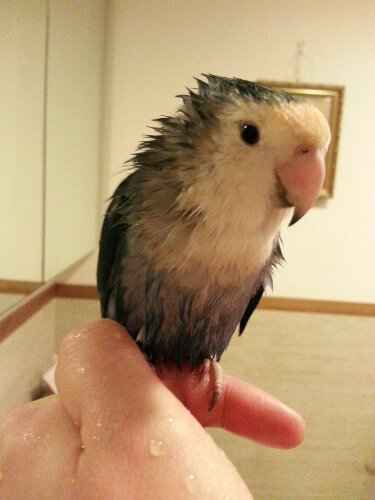 Yesterday I went on another hike, this time up Shimen Mountain near Taoyuan. Whew~ I’ve hiked up quite a few mountains in Taiwan now. This one was definitely not an easy hike compared to Tiger Mountain. It was drizzling too, so we had to be careful with our footing so as to not slip.

We were rewarded with a beautiful view of the Shimen reservoir. 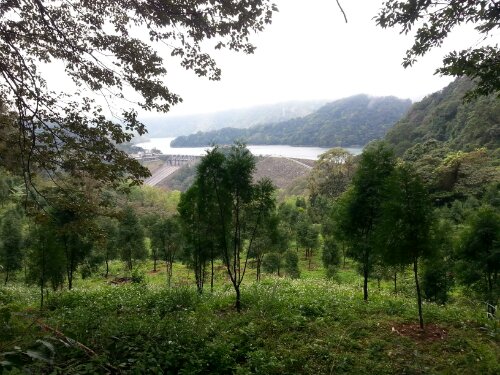