I can’t stop listening to ThePianoGuys on YouTube right now. If they ever have a concert in Vancouver, I will buy tickets to their show for sure!

These guys bring their instruments all over America (by the beach.. to the Grand Canyon..) and perform covers of great songs by combining them with classical music. Most of the songs involve the grand piano and the cello (including cool-looking electric cellos)!!

They really know how to give classic songs a modern twist, and at the same time transforming modern pieces into beautiful and melodic works of art.

I have more time to read now that I don’t have to study/read for school anymore. I recently finished a classic (“1984” by George Orwell), and am well on my way to finishing another one (“The Grapes of Wrath” by John Steinbeck). The Grapes of Wrath was the clear winner between the two, partially because 1984 was too political for my liking, and because I really like Steinbeck’s writing style.

John Steinbeck also wrote “Of Mice and Men”, and I remember reading that in English 11. However, I never truly appreciated Steinbeck’s style of writing until I had the chance to enjoy his book without having to worry about answering reading questions and finding symbolism etc. (Yes, school ruins the fun in reading!!!!)

The Grapes of Wrath is a story set in the 1930s, during the Great Depression in America. It follows the life of the Joad family as well as the greater things happening in America during a time when the economy was at its worst and farmers were being driven off of borrowed land. Steinbeck builds on his story, making something from nothing, until an idea is complete.

Even the title is beautiful. “The Grapes of Wrath” comes from lyrics from “The Battle Hymn of the Republic” By Julia Ward Howe:

“Mine eyes have seen the glory of the coming of the Lord:

He is trampling out the vintage where the grapes of wrath are stored”.

According to Wikipedia, these lyrics refer to Revelation 14:19–20 in the bible, which describes an appeal to divine justice and deliverance from oppression in the final judgment.

Steinbeck switches between the Joads and 1930s America in every other chapter. In one chapter, you are on the journey to California with the Joads, and in the next chapter you are seeing things from the general point of view of so many Americans during the dirty 30s. Steinbeck paints the story through dialogues and vivid details, bringing those details easily and effortlessly into the reader’s imagination. Steinbeck went on to win the Nobel Prize in literature in 1962.

“To the red country and part of the gray country of Oklahoma, the last rains came gently and they did not cut the scarred earth…” – The Grapes of Wrath

I heard about Menchie’s Frozen Yogurt when it first opened, and being a big fan of frozen yogurt, I have always wanted to give it a try. So when the chance arose (after having dinner at Saravanaa Bhavan, which was only a short walk from Menchie’s), I readily agreed to frozen dessert despite the cold weather.

Menchie’s, like Qoola, offers self-serve frozen yogurt. However, I love the large selection of yogurt that Menchie’s offers. I usually prefer sweet yogurt flavours over tart ones, and I was happy to see that Menchie’s had my favourite flavour: red velvet!! They also had creme brulee (I knew I would love this flavour even before I tried it), taro (this is my first time seeing taro yogurt), among many others. Another thing that I love about Menchie’s, other than the delicious choice of flavours, is that they let you take your own samples. They leave small sample cups on a side table, so you can pick and choose flavours to try before making a purchase.

The first thing that I noticed about Menchie’s frozen yogurt: it’s really thick! Unlike Qoola’s (which is runny and melts faster), Menchie’s yogurt, like Pinkberry, does not melt out too quickly! I really like that about Menchie’s. I chose red velvet, original, and creme brulee flavours, and topped them off with crushed almonds, green tea mochi, original mochi, skor, and chocolate sauce. The original flavour here is a bit too tart for my liking (Pinkberry’s original is still my favourite), but otherwise I loved my frozen dessert!

Frozen yogurt is a delicious and healthy alternative to ice cream. Self-serve complete with toppings just makes the whole experience that much better.

Saravanaa Bhavan is located on West Broadway, where a lot of other good restaurants are located. This place serves Indian food, and everything here is vegetarian.

I have not tried too many Indian dishes, but my favourite by far is the dosa (Indian-styled crepes stuffed with vegetables and/or meat). I am always excited to try Indian food, because I never know what to expect! The unique blend of spices that they use are so unique and flavourful, even though they might be a bit too spicy for some people. It’s always fun to order food in an Indian restaurant, where most of the items have exotic names such as “Bagalabath” and “Aloo Gobi”. Saravanaa Bhavan also serves something tomato omelette (not the omelette as we know it though! This one contains no egg at all, and it’s very spicy!!).

I ordered a Rava Masala Dosa last night. The menu described it as being a “cream of wheat & rice crepe stuffed with spicy potatoes & onions”. Spicy? Cream of wheat crepe? Yes, please! 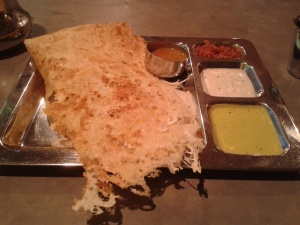 The wheat gave the crepe a crunchy texture, and after attempting to eat the dosa with a fork and spoon, I gave up and started to use my hands instead. The different sauces that came with the dosa were really flavourful, perfect for dipping the crepe with. The sauces from top to bottom: tomato, coconut, mint (my favourite one). The little dish on top of the dosa contained spicy lentil sauce. For those who can’t handle spicy things though, take note: this dish (and many other Indian dishes) are not for the weak of tongue. ;)